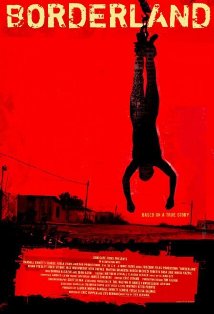 Three impulsive and illiberal students, awaiting grad school,  take a bro-cation to a tenderloin, Mexican border town. Although  looking for  dope and hookers, they accidentally find themselves the prey of a violent drug order/religious cult.  While one bro is being tortured and strung up by his castanets, the other two come after the well-armed gang with a tire iron and get their gringo culos handed to them.  They should have turned around at El Paso and headed straight back to Stanford.

Based on a true story, Borderland is a case where a better movie is lurking just beneath the one we’re unfortunately watching.  The American douchebags are neither sympathetic characters nor well cast actors.  More interesting to me is the gang of drug-smuggling orphans who kidnap virgin male tourists for their Jim Jones-esque leader.  A guy who performs a sadistic Santeria ritual upon the victim in the belief that such blood sacrifice will render him invisible to narcotics law enforcement.  Now that’s entertainment!