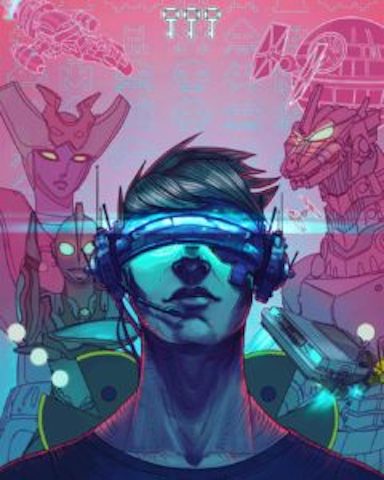 Ready Player One author Ernest Cline probably did not select the 1980s as the nostalgia motif of his novel simply because it happened to be the era of his youth. In current pop culture, Stranger Things, IT, 24K Magic, and plenty of other manifestations keep making the ‘80s the decade that cannot be terminated. Decades foregone, do today’s Gen-Zers ever feel false-nostalgia for Marcus Welby or The Macarena? There is something specifically poignant about the ‘80s that Cline thought would resonate with multi-generational readers.

Teenage Wade spends his days and nights memorizing the dialogue of John Hughes movies, listening to New Wave song files, and, most importantly, mastering classic arcade video games like Pac Man and Tempest. The year is 2044. Teen character obsessions with ’80s pop culture in Ready Player One is more than pacifying entertainment in the age of a catastrophic global energy crisis. Their avatar identities connect to virtual reality through a visor and motion-controlling gloves and hunt for treasure in the vast network called the OASIS, where people can become anybody they want or visit any place in the imaginable universe. Hunters occupationally plunder VR worlds for currency credits, fighting skill points, magic weapons and clues to the location of a trillion dollar prize. Halliday, a genius and recluse who designed the OASIS, has died and willed its ownership to the hunter who first solves a series of puzzles leading to a final figurative Easter Egg hidden in the lore of Halliday’s own ‘80s pop culture obsessions. The contest requires intense familiarity with Halliday’s favorite books, cartoons, and videogames from own teenage years, and has led to a global ‘80s craze fifty years beyond. As Wade, isolated in his personal hideout, describes, “Spiked hair and acid washed jeans are back in style.” He means what is in style amongst his peers inside the idealized and abstract universe of the Oasis.

In the America of 2044, climate change, wars and corporatism have reduced most of the population to depressed scavengers. Teenagers like Wade have been forced to abandon most of what we might consider a normal life of school, friendships, sex, and stepping outside. He lives a lonely existence in a vertical trailer park ghetto. But in the Oasis, Wade’s anonymous avatar, Parzival, is becoming the most famous Gunter [Egg + Hunter] in the world, relying on his mastery of ’80 pop culture to pursue the trail of Halliday’s arcane clues. The bulk of the novel follows Parzival, along with his team of Gunter comrades known popularly as the High Five, solving Halliday’s posthumous challenges left inside elaborate movie and videogame recreations. Their nemesis is IOI, a greedy corporation plotting to control the Oasis with a force of avatar clone armies trained to win the contests through cheating, extortion, and real world murder.

If this plot structure – a gang of troubled but precocious young people combine their expertises to defeat the schemes of an unscrupulous adult enterprise – sounds to you like Goonies, or Whiz Kids or other ‘80s era media artifacts, say Uno!

A recent article in the blog Vulture asked in its title Why Are We Still Obsessed With The ‘80s? Some of their answers were practical, such as what we see on our screens and hear through our earbuds is coming from media creatives in their 40s and 50s who have an affinity for the pop culture of their youth. Also the time traveling powers of YouTube and Facebook have mid-lifers introducing children, younger siblings, or nieces and nephews to the pop culture that populated their childhoods. So maybe the resiliency of the ‘80s is a phenomenon of shared multi-generational touchstones more available through current technology. As Vulture commented, “When one generation influences a second (and a third) generation in this way, there’s a pop cultural ripple effect that keeps on rippling… The pop culture we grew up on? You couldn’t ignore it if you tried.”

On a more theoretical level, Vulture suggested the tendency of media creatives to delve into the ‘80s as a means to connect the “now” to an era taking first steps into a transformative technological age. Nostalgia mining always offers an escape to idealized memories of youth, but the 1980s is the last full decade before the internet became an avatar for human interaction. In other words, maybe the reason why we keep trying to relive the ‘80s is because our computers have disconnected us from an authentic shared culture.

Ab ovo, Halliday’s Easter egg hunt. The futuristic odyssey specifically revisits a past in which technology was capturing young people’s desire for adventure before the internet supplanted real human interaction. We have to remind ourselves in the midst of Cline’s story that the High Five’s swashbuckling teen teamwork is all an illusion. In real life, the High Five buddies reside in remote parts of the world and do not even know what their comrades or competitors look like. Winning inside the Oasis – just as all commerce, politics, and notoriety of the day – is just a fantasy. There are not really trillions of dollars at stake in finding Halliday’s egg, just trillions of zeros and ones. The youths of ’44 have no actual participative culture of their own. It was Halliday’s dying desire to bequeath them his antique pop culture passions in a way that would stimulate actual interaction, something the inventor of the Oasis felt personally responsibility for ruining. Halliday’s contest is his last chance at real human connection, ironically after his death.

We might also say that Halliday is Ernest Cline’s avatar. Both the Easter Egg Hunt and Cline’s dystopian aesthetic are respective expressions of loss over something the ‘80s represented, a lost era of social engagement. Halliday filled his OASIS with references and facsimiles of the ‘80s culture he loved, then willed a contest which could only be won by someone who cared enough to love his same interests. Likewise, Cline, in writing Ready Player One offers readers a chance to connect or reconnect with his ’80s fondnesses. Of science fiction, another author, William Gibson (credited with reviving the SF genre in 1980s), once said, “It doesn’t resonate back from the future, it resonates out of modern history.” Cline’s sci-fi depicts a future that still searches for something we are missing out of our modern history. Both Cline, the creator, and his creator avatar, Halliday, seek to reboot real human-to-human communication. 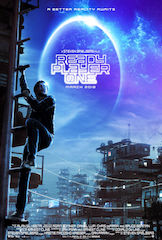 As for the Ready Player One motion picture adaptation, despite excellent special effects, it misses the chance to visualize the vast possibilities of the Oasis so inventively depicted by Cline. Also, the game of our hero Gunters using their intellectual powers to solve Halliday’s cryptic puzzles is given secondary treatment to fighting and action sequences. Not to say the action sequences are not well executed. In particular, a recreation of the movie The Shining as the setting for one of Halliday’s challenges provides something amazing on film that a novel could never do. Still, a disappointing shortcoming is the movie’s inability to capture the literal aspects of the Oasis as simulacrum, to understand the world’s fixation with videogames in this future as a product of desolation. Overtrying to be hopeful, the movie steps around an important theme in the novel, which explores something dark about our modern society and the mass-loneliness advance technology is creating.

Social commentary in the novel is deftly weaved through exciting action challenges. The book also succeeds in making our protagonist (avatar) Wade/Parzival both socially awkward and cool. The last third of the novel avails too much deus ex machina, and an anticipated final encounter feels rushed and superficial after the novel’s earlier insightfulness (Spoiler Alert: Only reality is real). Overall, Ready Player One is an electric read, the experience of a complete future universe both exciting and tragic.