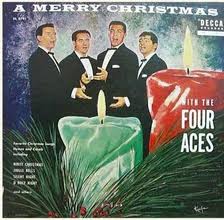 I’m still catching up on Christmas records that come from my mother’s record collection, a collection that I finally rescued from a Denver storage locker last summer. Today I attempted to make a digital rip of A Merry Christmas With the Four Aces.

The collection included all of my favorite Christmas albums from my childhood. But there were also a bunch I don’t remember. I think some of these were already in bad shape before I ever got there and they were already retired from the holiday rotation at our family turntable. Every track on the Four Aces Christmas is fucked up with skips. I’m not even going to save it, even though I love the music.

The Four Aces were a bunch of buddies from Philly high schools and the Navy who first formed a jazz instrumental group before discovering there was more demand for their vocal talents on the nightclub circuit. You have to be a real fan to remember which group of four Italian guys did which big vocal harmony hits of the early to mid-fifties era – The Four Lads, The Four Freshman, The Four Preps. The Four Aces are the four who did popular versions of “Love is a Many Splendored Thing”, “Three Coins in the Fountain”, “Stranger In Paradise”, and “Shangri-La.” All great records.

This Four Aces Christmas album has some great musical arrangements, including a lot of vibraphone. Even the usually slow tempo Christmas standards like “White Christmas” and “We Three Kings” are pepped up. And of course the Aces have perfect vocal arrangements. If you can find a clean copy the album it’s worth preserving. 3 gramophones.