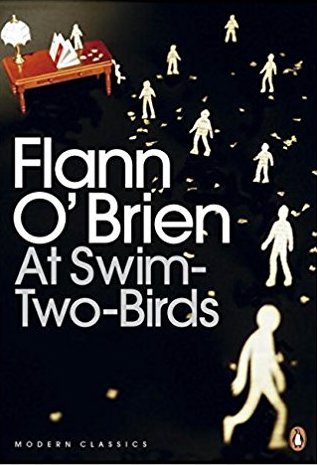 At-Swim-Two Birds is simply Flann O’Brien’s novel about an Irish student novelist writing a novel about an unfinished novel. Do you twig? The student’s spare-time literary activity includes spontaneous composition of the story of a lazy novelist who’s misused characters, drawn largely from Irish folk legends, animate and conspire to write their own novel in which their creator is tortured and tried for his abuses. In between the folk legend sections, O’Brien’s young author is browbeaten by his middle-class uncle who criticizes the student for his seeming disinterest in studying.

Metafiction may be a particular taste, as is toiling through O’Brien’s long adaptations of Irish verse and writing styles. I confess I wanted give up on this book early on, it was so bewildering. But sticking with O’Brien’s mythical fantasies and stream-of-conscious writing came to feel rewarding. Once I gave up on my inclination to understand every reference to Irish myth or modern Dublin slang term, I was able to absorb that O’Brien created something of epic imagination and wit, even while abandoning all writerly responsibilities toward character and plot. I’ve never been able to slog through the impenetrable language of James Joyce’s Finnegan’s Wake, the style of which O’Brien appears to imitate or parody. Maybe At-Swim is Finnegan’s Wake lite. I know I’ve never before successfully read an Irish novel like this, or finished one feeling as edified. O’Brien’s humor is wicked, and his gifts for description and prose are extraordinary.