SEA SWALLOW ME and OTHER STORIES by Craig Laurance Gidney 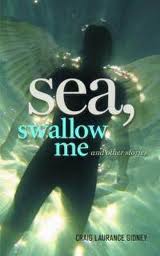 A young Japanese monk, yielded to a life of prayer and ministering to the poor is marked for love by a mischievous yosei, a shimmering male fairy with a fetish to tempt mortal chastity and piety. This chassis supports many of Craig Laurance Gidney’s stories: a young character in the ordinary toils of  earthly existence, crosses paths with a metaphysical experience. As in the case of the monk, “He who was studious and practical had caught the eye of something supernatural.” More often Gidney’s protagonists are young black and/or gay men in modern settings. A bored club kid unwittingly keeps psychokinetically murdering his sex partners. A lonely, island tourist pulled in by over-curiosity is dragged to the floor of the ocean and given physical wholeness from a benevolent, giant serpent. A nebbishy, underachieving artist chases off the cloying  ghost of his racist mother by deliberately having sex with a black man on her antique bed [respectively: “Etiolate”, “Sea Swallow Me”, and “Her Spirit Hovering”].

Gidney’s visionary universe exists in a literary dimension somewhere between James Baldwin and The Twilight Zone. The author’s imagination is alternately funny, melancholy, and fantastic and there is the consistent thread in this collection of his expressive narrative voice. He has dazzling skill at painting amorphous scenes with tangibility-  colors are carnal and smells are emotional. It’s never explicit whether the bizarre experiences of these characters are something truly supernatural, or if these phenomena are the delusive manifestations of their broken black and gay souls. Are they cursed or crazy? The character lives are humdrum, but not normal. Whose life is?

I have a couple of quibbles with the actual publication of Sea Swallow Me. First, the book was put out by an indy press and there are frequent typos. I know some readers for whom mistakes are maddening and others who would regard it as bohemian charm. I seek the noble path on the presence of typos because ideally it should be easier for a great writer like Gidney to find a big-six publishing deal that pays for unlimited editorial resources. But readers dropping $13 bucks on this book should be aware there are errors. Writers who are constantly encouraged to go indy or self-publish can take a sip of reality here: even a brilliant writer can get sandbagged with a sloppy book. Second, two of Gidney’s stories, “The Safety of Thorns”, about a young American slave who finds out the Devil is an apathetic drunk, and “Strange Alphabets”, a transcendental roman à clef about French poet Arthur Rimbaud in Jail, are pleasant guests here but otherwise foreign to the rest of the collection. In my editorial opinion they would be at home someplace else. It’s feels weird to launch this criticism given that these two stories in particular are each excellent standing alone, perhaps my two favorite in the book. If there is a collection of historical fiction somewhere in Gidney’s future canon he certainly has the background, discipline, and command of voice to put one together. Those two problems aside, Sea Swallow Me is a magnificent and mysterious body of work.