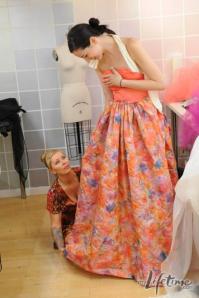 (television) Project Runway All Stars, A NIGHT AT THE OPERA. Design a gown that will only be worn to the opera. This is the sort of challenge I watch the show for. Ambitious, fantasy gowns where the designers can show both their modern creativity and nod to formality. It’s a much more interesting challenge to me than make a dress out of only things sold at Radio Shack. The opera episode was great too because the competition was truly all star; there were at least six designs which could have been a winner. But first, the judges definitely got all the losers right. One trend across the competition seemed to be a lack of knowledge about what a night at the opera looks like, manifest in high waisted hoop skirts. She’s going to the opera in 2012, not playing the part of Violetta in La Traviata. In the case of designer Sweet P’s losing gown it was a hoop skirt with a summer free festival color palette. Her girl looked like Violetta smokes hash at a Joni Mitchell concert. At the better end  I liked Rami and Mondo’s designs best and neither of them made the final judging. Some of middle-of-pack finishing gowns may have been deliberately left out of the final. Are the producers keeping the show fresh by holding back their ringers while the also-rans play out their role, which is to be cannon fodder? This may sound cynical but I’m beginning to question the veracity of reality shows… (cinema) Tree Of Life, d. Terrence Malick, 2011. 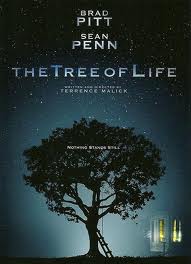 This movie got a lot of attention last year and deservedly for being an amazing achievement. Frankly I’m surprised that something so abstruse and non-plot driven garnered so much attention. The late Andrei Tarkovsky made films that were just as lyrical and ambitious but nobody ever heard of him. Lars Van Trier makes films that are perplexing and unorthodox and nobody goes to see them. Perhaps at least part of the draw into Tree of Life is Brad Pitt and the reputation of the ascetic director. Terrence Malick has only directed five feature films over nearly forty years, most of them great. It turns out the middle-class family depicted in Tree is at least partially autobiographical. These are memories of Malick’s own childhood in a film he’s apparently been making since 1973. It’s highly personal but it’s also universal. In fact Malick depicts both the beginning of the universe and the end of it as bookends around the mundane experiences of his family. I thought the creation of the universe, special effects sequences were amazing (real photography techniques, not CGI). The family stuff I didn’t respond to as strongly. If I can get personal on you, the ontological questions, what is the meaning of suffering, is God responsible stuff didn’t evoke in me the kind of response I think was intended. It just made me think “Look, there’s no God, get over it.” But Tree of Life is an epic poem spoken though film and it’s extraordinary.