(cinema) Tinker Tailor Solider Spy, d. Thomas Alfredson, 2011. I’m sure there are people who love this British Cold War cloak and dagger stuff. I’m either too dumb or too impatient to keep up with mysterious plots that turn on a word mumbled over a reel-to-reel tape recorder in a dark room. I might also benefit from an English to English lesson as everything including the title in TTSS requires having foreknowledge of British noir lingo as well as the political context. I’m pretty sure Gary Oldman is great playing the role of soft spoken detective who struggles to contain his outrage, but I miss Robert Mitchum. The ending where Oldman sets a trap to draw out the mole totally confounded me. I watched it twice and I still don’t get it. If anyone can explain it, I come with a degree in media studies and I’m all ears. 2 movie spotlights… Sherlock Holmes: A Game of Shadows, 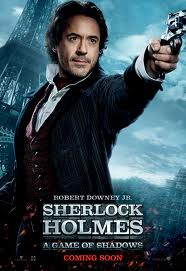 d. Guy Ritchie, 2011. The reboot of Sherlock Holmes with Robert Downey Jr. in the lead a couple of years ago set out to depict the iconic detective character as uninhibited, amoral, Saturnalian, and manic. If the original Holmes was a little neurotic, the new one is supposed to be bat-shit crazy. That was an update I could live with as Robert Downey was so good and the movie was well produced. There were great effects and modern editing trends but Victorian London was believably dark and pugilistic. The action sequences were an engaging addition to a good detective story. Game of Shadows abandons the detectiving of Holmes and Watson to show them instead as adventure characters. And I find the whole adventure pretty uninteresting. What we get is an endless series of escape sequences from boring villains. Sherlock’s sleuthing acumen has become either quasi-supernatural or silly and defiant of logic. The special effects are impressive, but what Guy Ritchie has done with Holmes is turn the legend and the franchise into a video game. 1 movie spotlight… Star Trek II: The Wrath of Khan, d. Nicholas Meyer, 1982. Somebody just told me that after Wrath of Khan all the makers of subsequent Star Trek movies felt they had to unfairly compete with Khan, that the series reached its high watermark early. I think a lot of the films are great, especially the last two from Next Generation, Nemesis and Insurrection. Wrath of Khan is great because the characters are familiar enough that the story has time to explore Kirk’s anxieties about reaching middle age. As a character study this is manifest in Kirk being chased around the galaxy by his demons- an old enemy, his illegitimate son, the death of a friend. I hadn’t seen this movie for years and for the first time I picked up on some big holes in the science. Ironically Khan could be the best script in the series but there are better overall post-Khan Star Trek movies. 3 1/2 movie spotlights.