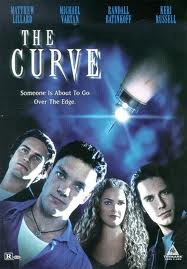 Two college roommates, Tim, an underachieving playboy and Chris, a scholarship student, determine to capitalize on a school policy that grants a 4.0 grade average to a student if their roommate commits suicide.  The two plot to push a third roommate over a cliff and make it appear as suicide.   When the police investigate, Tim leaves a trail of clues to frame Chris for murder.  Then the roommate they thought they killed shows up alive.  Was the whole thing really plot to kill Chris and fake his suicide?

I have to credit this movie for Matthew Lillard’s standout, Dennis Hopper-esque performance, but that is the extent of my generosity.  With all the twists in the story, characters with secret alliances, and casting Lillard as the lead, you can see that somebody thought The Curve was going to be the next Scream.  But they neglected to provide any likable or believable characters.  They don’t come off to me as clever and cool, just petty.  Save your trash diving for the Jerry Springer show.

Bad To The Bone