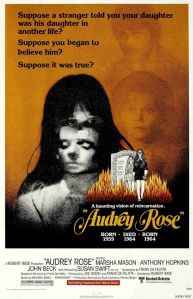 A married couple and their daughter, Ivy, find their happy, cosmopolitan life turned tumultuous when a disturbing man attempts to convince them Ivy is his deceased daughter, Audrey Rose, reincarnated.  At about the same time, Ivy starts having terrifying sleepwalking episodes in which she takes on the personality of Audrey Rose, and acts like a lunatic.  The movie is organized as two discreet parts.  The first half follows the family and their uninvited interactions with the strange man.  It’s excellent phychological drama performed by a classy cast.    The second half  is mostly courtroom and hospital drama.  A dozen or so lawyers or doctors walk in and out of professional decisions in regard to Ivy’s welfare that were harder to fathom than the concept of reincarnation.

A post script on the Audrey Rose movie poster.  When I took a closer look at it I wondered if it was designed by somebody who didn’t see the movie.  First, there is a very prominent illustration in the bottom right of a girl walking out of a grave that’s surrounded by flames.  Trust me there no scene like that.  Second, they depicted a weird apparition over Ivy’s face which I take to be the ghost of Audrey Rose.  Although in the movie we only see Audrey Rose as a 5 year old girl at the time her death played by the actrees who played Ivy, or some similar looking child.  Then it occured to me that the apparition is not Audrey Rose at all but actually David Bowie: 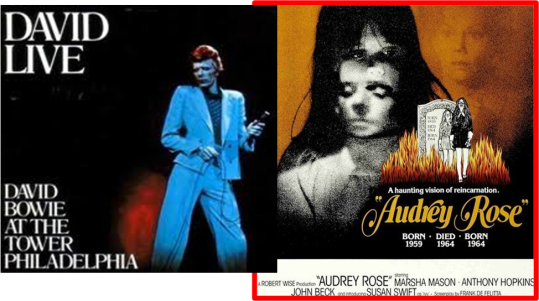 A NATION OF SUCKERS

"Living In A Golden Age" by Icarus P. Anybody