Once Upon A Time in Italy 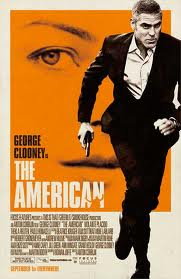 In one reflective scene of The American (of which there are many) the character Clark (George Clooney) sits in an Italian café considering his future and his immediate personal safety.  He is characteristically composed while knowingly being followed by a hit man.  A Sergio Leone “spaghetti” Western, Once Upon A Time in the West, plays behind him on an oddly bright flat screen television.  A state-of-the-art television feels awkwardly foreign in the quaint café; a reverberating theme as the broadcast is an Italian movie about an old American place directed by an Italian.  Leone did what he’s good at.  That’s the same way Clark describes himself in his job as freelance assassin and expert gunsmith, attempting to blend into the reposing Italian villages and  proceed unnoticed,  like a flat screen t.v. affectedly hung on the wall of an old cafe.  Although the story is contemporary, The American is a citation of classic Westerns.  Borrowing from a familiar movie Western trope, e.g. The Wild Bunch or Unforgiven, Clark is considering taking one last fated ride.

Clark is his apparent last name.  His first name may be Jack or Edward.  His identity and background are purposely opaque, an allusion to The Man With No Name character played by Clint Eastwood in Leone’s “Dollar” Westerns trilogy.  After a murky attempt on his life, in which Clark  feels forced to murder his girlfriend, he hides in the small Italian village.  One last assignment comes along, this time only to build a high powered rifle, not to pull the trigger.  Inbetween work on the gun he visits a local prostitute to alleviate his loneliness.  While at first telling her he is only interested in his own sexual gratification, he gradually begins to take real romantic interest in the prostitute, however tainted it may be, even performing sex acts in which she is the object of pleasure.  Meanwhile Clark also has a date in the woods with his client for the rifle, a sexy woman assassin who is finally his equal in weaponry, intellect, and inscrutability.  They seem compatible as more than just colleagues.  They share an almost romantic afternoon complete with a picnic basket and mutual appreciation for Clark’s large and powerfully accurate gun [insert Freudian reading here].  But he is incapable of, or indifferent to, reciprocating the hit lady’s flirtations beyond their professional relationship.    What he wants is the money from this last job to facilitate escape from Italy with the prostitute.  However, this plan to finally get out results in his becoming a target of the people he works for, and his escape from the emptiness is thwarted in an ending reminiscent of many Westerns as well as Greek tragedies.  Perhaps it is the Western genre itself which is so reminiscent of Greek tragedy.

Clark is a depicted as a highly paradoxical anti-hero.  In what little we learn about him, we gather that the loneliness of this career as paid killer suited him better at a younger age.  He is told by his superior that making friends, such as the murdered girlfriend, is a mistake Clark would not have in the past.  Clark’s desire to change and find love and fulfillment in life, instead of only the hollow rewards in killing people, is said to be a sign he is losing his professional edge.  The requirement of denying intimacy is characterized brilliantly by Clooney who plays Clark not as unemotional, but as methodically guarded.  His Eastwood-esque sentences are clipped but never timid.  He balances his persona like the sights on the rifle, but he can no longer fight his underlying desire to become a whole person.    He wants the chance to be a lover and no longer an expert killer.  He is trapped in the life he has chosen and in the sins he’s committed. His very desire to rescue someone – the prostitute – to become a real hero, is what leads tragically to his downfall.

The Most Homoerotic Politician Photos Ever Taken