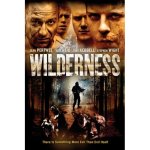 Even the finest among us are occasionally drawn into a wilderness of bad taste.  For some people it’s movies of the plotless action/explosion genre, for others perhaps a maudlin romance adapted exactly from yet another pedestrian Nicholas Sparks novel.  Wilderness did have all the shameful tropes I’m secretly into: delinquent boys, torn shirts, handmade weapons, fragile, fraternal loyalties.   When I trip over this sort of trash, I forget all about Citizen Kane or Ingmar Bergman.

Six really bad teenage boys locked up in a British boys prison bully weak kid until he commits suicide.   As punishment the boys are sent on a camping trip to a remote Scottish island for character-building and camaraderie.  Seems to me this program might have been more useful before locking them all together in a windowless cage.  Whatever, the island turns out to be about as deserted as Piccadilly Circus.  There are wondering vagrants.  There’s a group of delinquent girls from a counterpart prison who apparently double-booked the island for their own character-building.  And then there’s a deranged archer who starts eliminating the island’s visitors one-by-one with flaming arrows and a trained pack of blood thirsty German shepherds.  Wilderness is little more than a derivative of a slasher movie that vaguely arbitrates between awarding morality and altruism with clemency while selfishness, hubris and, of course, sexual potency beget violent punishment.  I will say it is notably well acted for a story otherwise so dimensionless.  The revelation around the mysterious archer is plotted way too obviously for any suspenseful currency.  Most disappointing to me, the homoerotic opportunities never amount to much, if you like what I mean?