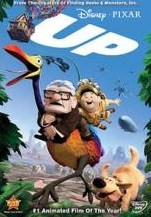 First of all, I don’t care for cartoon movies.  To me cartoons are great at about 6 minutes running time and when the twist ending is that Coyote’s malfunctioning steam roller is revealed to be a product of the Road-Runner Steam Roller Company of Flagstaff, AZ.  That’s all the sophistication I expect.   But, I don’t see many cartoon features.  I remember liking  Beauty and the Beast, but it was really just an animated drag show.  Toy Story?  Shreck?  I’d rather be sentenced to life imprisonment on Its A Small World at Disneyland than sit through either again.  Second, I’ve reached a stage in life where I just don’t want to be confronted with growing old and dying.  And I’d rather be sentenced to an eternity of low impact aerobic classes than identify with a widower.  Still I’d be disingenuous to say I disliked or even was disinterested in the animated feature Up.

An elderly widower delivers his deceased wife’s lifelong wish to live above a beautiful waterfall in Peru.   He embarks on a plan to fly their entire house to South America under hundreds of helium balloons.  Along the way the widower takes on responsibility for a misfit gang of child and animal sidekicks who help to restore his desire for adventure .  What’s missing here are the cloying Tim Rice songs, virginal princesses, out-of-period pop culture references, and distracting celebrity voiceovers.  Thank God for that.

There is a lot of fable formula in the story too, but what I liked about Up is discovering myself  buying into both the post-modern and fantasy elements.  In Up world children can be distant from a divorced parent but also dogs can talk. I’ve heard critics praise Up for its opening act in particular, a kind of pantomime of the wife’s joyful life and peaceful death in a manner that is unique, mature, and genuinely emotional.  I understand why people love that sequence but I could have done without.   It just depressed me.   I’m sure it’s what distinguished Up for people as material worthy of a best picture Oscar nominee.    I personally would prefer the whole thing cut down to under 6 minutes and  blissful assurance that the cartoon is over when a pig says da-dats folks.