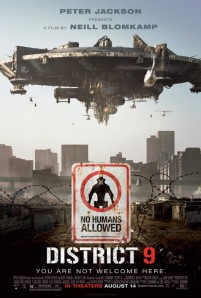 The late sitcom star/Shakespearian thesp Robert Reed was reputed to spin in fits worthy of Richard III over bad Brady Bunch scripts.  In one such memo to the show’s producers sent after walking off the set Reed wrote:

This may seem an odd place to start on Distrcit 9, but my principle dislike of the movie is akin to Reed’s rage on The Bunch.  At first posing in the format of verite documentary, mixing news video, contemporaneous subject interviews, and ex post facto expert analysis, District 9 depicts a near-future, first-contact event.  A colossal space ship has double parked over the city of Johannesburg, South Africa.  Its passengers, the Prawns, are a million plus alien refugees, who, despite possessing incredibly advanced astrophysical technology, get herded into vast terra firma concentration camps.   Enter, proscenium our principle subject/character Wikus Van Der Merwe, a goofy corporate stooge, placed in charged of evicting the now twenty year resident aliens of District 9 into the apparently even more concentrated District 10.  The eviction team leads a point-of view camera into a series of violent scenes that include Van Der Merwe’s ingestion of a mysterious alien fluid.    Slowly he beings metamorphosing into an alien hybrid.  Van Der Merwe also transforms from puppet of the corporate-state apparatus into a hunted fugitive.  Betrayed at every turn, Van Der Merwe is forced into ally with the Prawns.  Also, as a necessity of this narrative the movie morphs from pseudo-verite documentary into traditional genre as the initial point of view is no longer working.  Eventually, Van Der Merwe climbs into a Transformers style robot power-suit to help his new found Prawn friends escape from their oppressive circumstances on Earth.

The faux reality-tv camera has become a kind of genre of its own in recent years, executed successfully in films like The Blair Witch Project, Cloverfield, and Paranormal Reality.  Part of the appeal of this genre, at least for film geeks, is the challenge of keeping-it-real, or keeping “reality” real.  District 9 starts in this place and then eventually has to move into a more traditional narrative structure.  Why?  I’m not sure.   The commentary here is that quasi-fascist states act evil.  Is this a revelation to people?  I’ve read that the film is an allegory to the xenophobia and social segregation of South African apartheid.  A serious subject, no doubt, and still fresh enough, I think, to address head on.  I’m not even sure the CGI and other fx in this movie mark any new territory.  But ultimately my suspension of disbelief is too tortured to stick with the assembly line action-movie story.  If District 9 is supposed to be a social commentary, I find it pedestrian.  If it’s supposed to be a sci-fi action thing I find it boring.  Is District 9 bad pseudo-documentary, is it sci-fi buddy action, or it just a mess?  I can’t play it.